The place turned put to be not too bad, it was just that it wasn't anywhere near the VF route as we expected. The heating worked well enough to dry our shoes and socks, so we were starting the day with dry feet. Breakfast was basic, a yoghurt, croissant and coffee; at least we were offered a second cup of coffee. The woman also obliged by phoning for accommodation in Sarzana where we are headed today. The first number didn't answer but the second, La Locanda Dei Limone, she was successful and we have a bed for the night. We got a lift back to the bar at the bridge where we were picked up last night though like yesterday it was a hair-raising ride, he thinks he drives for Ferrari.

The VF signs, once we remembered where we saw them yesterday, guided us across the river by a large bridge. We had a choice, stay on the road, the SS 62, 14 km all the way to Sarzana or take the longer off-road waymarked route of 17 km. The road as we crossed the bridge looked busy and potentially dangerous, and as we had accommodation arrange and in no hurry decided to take to the hills. It was just on the other side of the river that the waymarks deviated from the road. It wasn't long before we took a wrong turning, at the first junction. The signpost had fallen down and there was a red and white waymark on the edge of the bridge crossing a steam, the other narrow lane went uphill and didn't look right anyway. Wrong! We should have gone right and we steadily climbed for about half a kilometre before realising this wasn't the route. After consulting Cicerone we had to backtrack and pick up that unpromising narrow lane.

Cicerone warned that the terrain today was very tough, lots of climbing over some rough and stony tracks. Also that to be careful in autumn with the leaves covering loose stones and making it treacherous in places. Alison Raju, the author of the guide, tends to be a bit of an alarmist and things aren't as bad as she makes out. This time she was correct in that it was a tough climb but not any worse than hillwalking in the Lake District or 'bagging' a reasonable Munro in Scotland. After leaving the tarred lane it was on a narrow typical mountain track steadily climbing through the trees. We reached the first top at Bibola, a hamlet of a few houses and made better time on a wide gravel forest track which dropped down over a couple of kilometres to the small village of Vecchietto. We had a rest in a bus shelter and consulted the guide book. It was only 9 am and too early for tea and the next opportunity according to the book was in 2.5 km at Quatro Stradi. 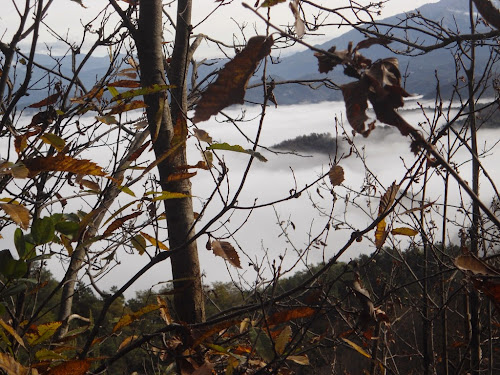 We thought that to be a good target and set off again. It was grueling and relentless climb; each time we thought we had reached the top the path took a turn and found yet another hill to go up. When it did level out it was on a contour path that went round a circle of hills. Below us in the bowl in the centre of the ring was a bank of low lying cloud. It was like a lake in the middle. Once round the perimeter there was a final short climb to a clearing, this was Quatro Stradi a junction of paths.

It was definitely time for a break and a cup of tea. The 2.5 km had taken nearly an hour to complete. I put my rain jacket out on the ground and with my rucksack as a pillow stretched out while drinking my tea. I remarked to Moira that a week ago we were wrapped up against the cold, then a few days later covered up from the rain, now I was lying basking in the warm sun. When we left this morning there had been a thick mist but now the sun had burnt it away and we had a clear blue sky.

On the go again it was basically downhill to the finish. The first section of 3 km started on a quick wide gravel track but then narrowed to a rocky, mountain path. It wasn't as steep as the ones we had come up and so were able to progress at a good pace. Cicerone said there were streams to ford but all of the ones we came across were just trickles of water. The tracks and paths were also quite dry, we got the impression that there hadn't been a lot of rain here. 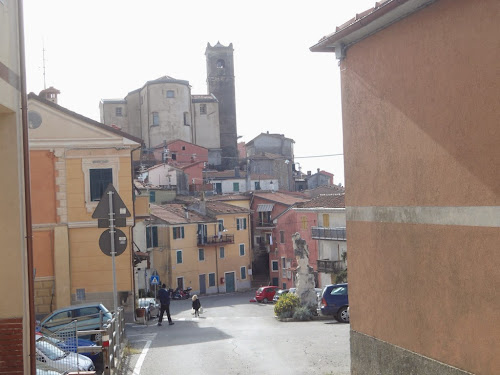 Soon we came to the large village of Ponzano Superiore, the church and a lot of the houses perched on a conical hill above the road. We followed a waymark round the town but discovered it was heading down to the town of Santo Stefano di Magri. This was the town on the SS62 that we did all the climbing to avoid. We backtracked into the village and a man who spoke English guide us to the direct rout to Sarzana. He was an experienced walker having done the three major routes of the Camino de Santiago. He compared experiences of walking in Spain before continuing. The view now was a panorama of the start of the coastal plain that runs down west of the country. It was littered with towns and villages and in the distance we could just make out the waters of the Mediterranean. 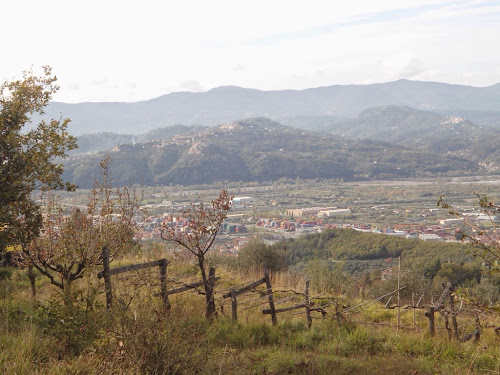 We had 6.5 km to go and it was nearly all downhill and as we looked back there was Ponzano high above us. At first it was easy going, a gentle slope on a wide gravel track. Soon though it narrowed as we came to the site of an 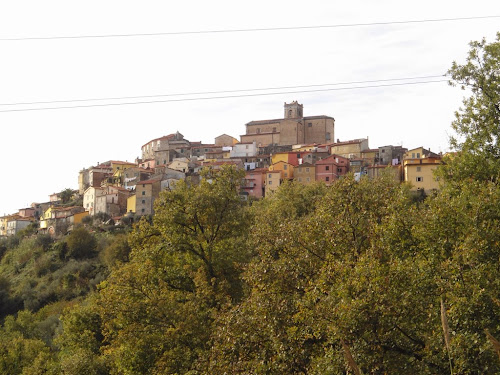 archeological excavation of a 9th century castle. There were only a series of walls about a metre high recovered and our route twisted and turned around the dig. It was then a very steep and tricky descent before we finally reached a smooth tarred surface. There was a well placed seat beside a river but the water was too far down to get any for tea. I was carrying a litre of wine that we didn't drink last night, I transferred most of it into my water bottle and we had what was left with cheese sandwiches for lunch.

It was a flat 2 km to Sarzana but now we were tired after all the climbing and rough surfaces and found it a slog. As soon as we entered the town centre Moira made enquires at a shop about our hotel. It was on the Piazza Jurgens and near the railway station. There were signposts for the station but we asked people a few times to make sure, one man practically took us there. La Locanda Dei Limone was right next to the station. The sign said it was a B&B but once the documentation was over the woman took us outside to where the rooms were around a central lawn with lemon trees. The room was small but adequate and en suite. I made a cup of coffee and we relaxed for an hour.

Moira suggested that we book in here for another night, walk without our packs to the next town of Massa then return by train. Good idea!

We set off to find out about trains at the railway station. The man spoke English and after consulting his computer gave me the times of trains back from Massa tomorrow afternoon. Now our plans for the next stage were settled we went in search of a supermarket for food. There was a large one in the town centre and we were now able to stock up for Sunday's dinner as we wouldn't have to carry it. Back at the room I found that there wasn't any hot water, not that it wasn't hot but there wasn't any. The woman tried to sort it out, unsuccessfully and phoned some mechanic. At least she managed to get the heating in the room working. Moira booked and paid for another night here.

We had bought some beer and a bag of crisps which we lay on the bed and ate before I went out to get a pizza. There was a pizzeria in the piazza and I found out that the man there also owned our hotel. He apologised for the hot water problem, he said the boiler had been service today and a valve had been left closed, he had rectified it. Having just to cross the square the pizza was still lovely and hot when I got back to the room. I only bought one and it was enough for both of us, there was also had some fruit to follow. The owner had sorted out the hot water and we were now able to have a shower. With the heating also working well Moira washed our t-shirts and hung them over a heated towel rail in the bathroom to dry.

We were both very tired, what with waking at 5 am each morning and then putting in about 20 km in the hills you can't stay up late. It was about 9 pm when we went to sleep.

Posted with Blogsy
Posted by Unknown at 04:28