I wakened up about 4 am and the rain was lashing against the window and it was forecast to be good weather. I went back to sleep and dreamt of the sun shining. Once breakfast and packing was done it was shortly after 7 am when we left, surprise surprise there wasn't a cloud in the sky, the forecast was correct. It was another 30 minutes before we eventually cleared Siena, Moira had to get some money from a bank machine, then bread for lunch. We left the old town by the Porta Romano and now we are seeing direction boards for the traffic with Roma of them, not far to go now ! 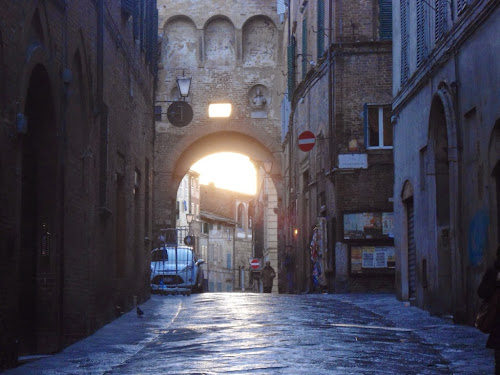 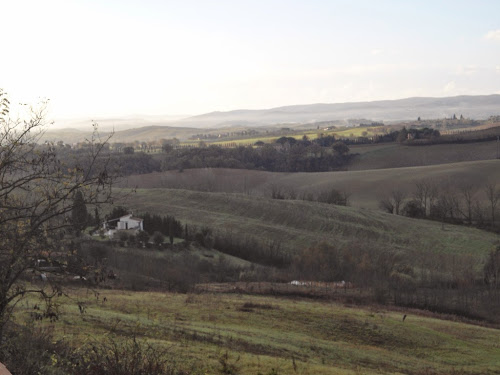 As we got out into the country the landscape ahead of us was rolling hills, coloured bright green after all the recent rain. We were on tar for the first 5 km or so, then it became unsurfaced as it made its way along a ridge with lovely views all round. Everything was going fine and we were doing a good pace when as the route turned through a farm yard we ended up crossing a field which was a complete bog. It went downhill initially and we gained about 3 inches in height as the clay mud built up under the soles of our shoes. At the bottom of the hill it became very wet, which helped to clean the mud from our shoes, as it then headed to a tarred road and that was a relief. The road went steadily up and we were making good time again, our climbing has improved and it is preferable to downhills which still hurts our knees. Just as we were reaching the top of the hill the VF turned onto a track and it was mud again. The tracks from now on seemed to be in places covered with the clay soil washed onto them from the fields by the heavy rains. Sometimes it was just a thin layer and solid underneath but at others deep-squelchy-foot-sucking mud. Where possible we walked on the edge of the path where there was some grass growing and this prevented us slipping and allowed us to go a bit faster. 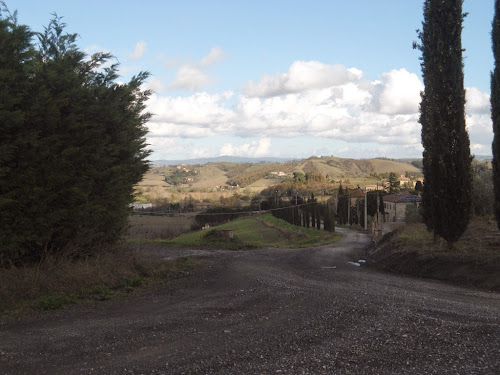 As we progressed along the ridge we could see a series of towns and villages on the valley below. Cicerone had listed some of them that we passed through; Borovecchio, Isola d'Arbia, Grancia di Cuna, Greppo, Quinciano and finally our destination for today Ponte d'Arbia. We kept expecting to get relief from the mud by dropping down to the valley to go through these places as in the guide said but every time we came to a junction that headed down we were directed in the opposite direction. By this time I was completely disorientated and fed up with the mud when we came across a farmer out with his dog and gun hunting. He pointed out the first two places on our list back along the valley and in front he said was Grancia di Cuna. This time the track turned in the direction of the village and just before we entered it there was a friendly bench waiting. I made coffee and we had it with a biscuit before continuing.

The weather was now excellent, the sun was warm after a chilly start. We had begun with all our rain gear on, to keep warm and just in case the rain returned. After an hour the jackets came off and now at our break the trousers were stored away. We were down to shorts for the first time in over a week. We didn't enter this village either just skirted round it but it was on a dry firm path again and we were striding out. There was another climb as we headed up to a belvedere or viewpoint, it gave a 360 degree panorama of the rolling hills and valleys with the series of towns along its length. When we dropped down again it was still on to a wide track but again covered in mud. This time it wasn't too bad and we could make fairly good time but had to be careful about slipping.

It was now getting near to our lunch time but we had no water. At the top of a hill there was farm house and Moira asked the farmer to fill our bottle which he did with a smile. He told us this was Greppo, the next village on my list, I don't know whether it was just the farm or there was another part down the hill but we came to a junction just after with a sign pointing to Quinciano which was only 1 km away. There was another welcoming bench next to this signpost and we stopped at it and had lunch; bread and cheese with a cup of tea.

After lunch it was on a tarred road into Quinciano and we actually went through this small village but were soon out the other side. The road continued to decend and met a major road with a path beside it. We followed this road until directed to a path that ran next to the railway all the way into Ponte d'Abria. This was a fairly good track but there was slippery mud in places and we had to be careful where we put our feet. Now the route was along the valley and the views were to the hills on either side while in front were much high climbs which we tackle tomorrow. 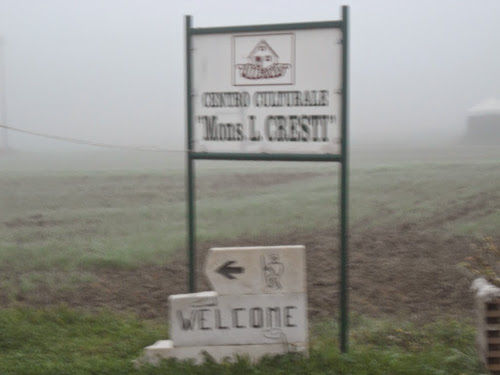 At the t-junction at the entrance to Ponte d'Arbia the route continued to the right but we went the other way towards the town. The pilgrim's refuge was signposted Centro Cresti and we followed the directions over the River Arbia to the yellow house on the other side. There were plenty of signs there with little monk symbols and welcome messages but the door was locked. The instructions were to contact Patricia in house No 18 opposite. We went across the road to the house but there was no number on the door. Eventually we found a young boy in the house watching TV, he was annoyed at being disturbed from enjoying his programme and wasn't very helpful just shrugging his shoulders to our requests for the key. We returned to the refuge and looked in the other direction down the path. A woman who was there came along with us to the refuge, lifted the door mat and there was the door key underneath. It was a very nice place with a mixture if dorms and rooms. We selected a room with two single beds and dumped our bags there. While Moira went out to the supermarket I made a cup of coffee, washed my muddy socks and had a shower. Everything was perfect and we had the place to ourselves. The supermarket wasn't open and Moira had to go back later to get food, there was a kitchen here so it was another night of home cooking. There was also a supply of some basic foods here for a hungry pilgrim; packets if pasta, tins of tomatoes and beans, onions, garlic and potatoes. Moira made a pasta with spaghetti and prawns she bought at the shop. We had a huge bowl of it each, not the little measure you get in restaurants, we were starving after our hard slog through the mud.

While we were having dinner a man arrived. He didn't speak any English but he appeared to be in charge of the place. He had just come, I think, to make sure we were all right and indicated where to leave the key when we left in the morning. After I had washed up we sat in the kitchen and read. It was a smaller room and warm from the stove with cooking.There was a tin of drinking chocolate supplied and later Moira made some which we took upstairs and drank it in bed. It was a quiet peaceful night in comfortable beds and it was all for just a donation.

Posted with Blogsy
Posted by Unknown at 04:58