I have been worrying about today's route for a number of days. It was probably a mixture of the length; nearly 30 km, the climbing; to nearly Munro heights and our guide book; it gave various options on how to get to Radicofani and it was becoming confusing. After yesterday's route finding calamity I was even less confident about today. As it turned out it was a breeze, there was no difficulty with the route even though we ventured off the waymarked paths and the taxing climb was only for the last 8 km up to Radicofani perched on top of a hill. 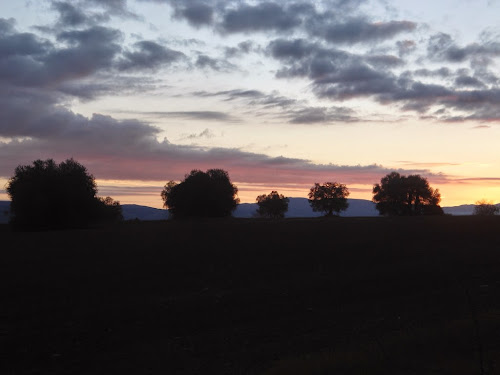 There was no mist this morning as we set off before 7 am to get a good start and it was looking very promising weather wise. We watched the sun rise and there was a fantastic display of red colours on the horizon as it appeared. We walked along the old streets of San Quirico with two beautiful churches and out the Porta Romana into the new town. As we left, the road began a steady climb on a minor road, when it finally crest the summit there were splendid views of the surrounding countryside and the dazzling sun which was now higher in the sky. After all the climbing it was down the other side to the village of Vignoni Alto then a further drop to Bagno Vignoni with its thermal spa. As we dropped, ahead we could see the high hills to be tackled and the Via Cassia, the road we had our troubles on yesterday in Buonconvento, like a long band stretching ahead over the landscape. It is the SR2 and goes all the way to Rome. Also far ahead we could see the tower of the castle in Radicofani on top of a domed hill; we would see it all day and most of the time it wouldn't seem to be getting any closer. 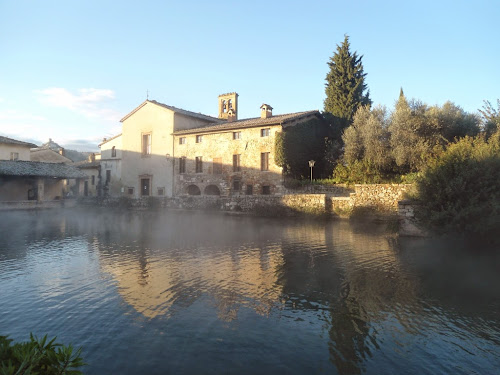 When we reached Bagmo Vignoni the waymarks guided us into the spa. There was a large pool where sulphurous water game bubbling out the ground at 50*C. There wasn't anybody in the pool at that time of the morning and the shops and bars were only coming to life. After guiding us into the 'commercial area' the waymarks disappeared and there was a lot of cursing on my part before we found the way back to the VF. From there it was down to the SR2 / Via Cassia where we had a choice to make. We could follow the waymarks on a loop cross-country to avoid the road but add an extra 5 km to our day or walk to the town of Gallina along the road. The guide book seemed to imply that there wasn't a lot of traffic on the road so we took that option. It was 6 km to Gallina and it turned out that the flow of cars and trucks wasn't excessive and we managed it comfortably. It was a steady climb initially then it undulated as it crossed rolling hills. The views now were outstanding with hills all around us and still in front the domed hill of our destination. 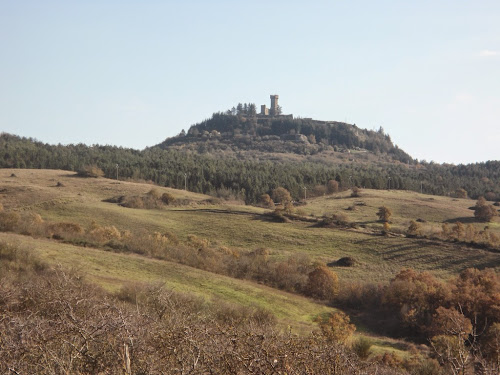 As we reached Gallina there was a large carpark and a chilldren's playground with picnic tables, the ideal time and place for a rest and a cup of coffee. There was a campervan parked there and as we approached the man got out to say hello. He was from Strasbourg and they had stayed in the carpark overnight treating it like a 'aire'. His name was Paul and his wife Helga came out to talk; they were impressed with what we were doing and told us to come in for coffee. So I didn't have to make anything and we had our break in the comfort of their 'van and they also gave us cake. They were having a few weeks touring Italy and complained about the heavy rains. They were heading for the thermal spa at Bagmo Vignoni and we confirmed that it was open. They were a friendly couple and there was the usual photo session before we got going again. 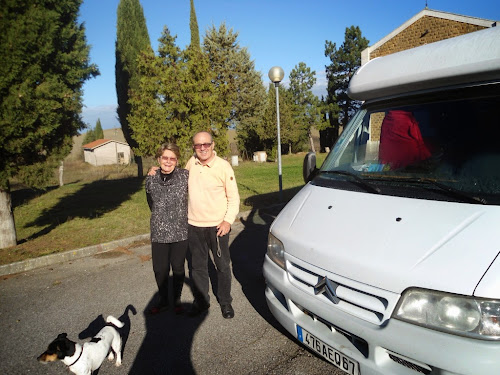 We continued along the Via Cassia again and rejoined the main route for a short while but it deviated again to the village of La Briccolo. This route wasn't advised by Cicerone if the weather had been wet as there were a few streams to ford. We continued on the busy road and I thought we had another 6 km to go before we took the turning signposted to Campiglia d'Orcia, as the guide book said it came at kilometre marker: 167/ii and Galena was at marker: 173. We had only gone about half a kilometre when I saw our turning signposted in 500 m. The next peculiar thing was that suddenly the kilometre marker showed: 167/iii the road had lost over 5 km somewhere. The actual turning arrived exactly on 167/ii. We were a bit doubtful about it but turned anyway and after 200 m there was a fork in the road predicted by Cicerone which we took, it looked all right. And it was, after a kilometre we joined up with the route from La Bricolo and the waymarks began again.

It was 2.5 km of steady climbing, on what was the old Via Cassia, in countryside that was beginning to look fairly barren. At the top of the hill there was a junction of routes, one continued to Campiglia d'Orcia and will become the official VF once all the waymarking is completed. Our route was the other fork to that elusive tower in Radicofani, still tantalisingly ahead of us but getting slightly closer. The road dropped down to a hamlet of a few houses, Ricorsi, before rejoining the new Via Cassia. There was a path beside the road with the VF plaques and we followed that to the junction of the SP478 to Radicofani. Unfortunately at the road junction there was a bridge crossing the Torrente Velloro but we were underneath and expected to ford it to pick up the road on the other side. Moira wasn't having any of that and backtracked until she found a route up the bank through bushes to regain the road and cross safely by the road bridge. 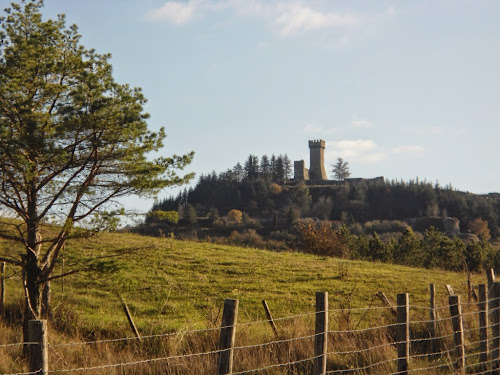 There was now the final 8 km to go and all uphill. We had a break after the first kilometre in a sort of lay-by at the side of the road. There we had lunch stretched out on the grass with our rucksacks as pillows. The sun was blazing down from a clear blue sky and it was another occasion when we looked back to only a few days ago when we would have been looking for shelter from the rain. On the go again it was a steady climb and the dome of the hill with Radicofani and the castle tower becoming nearer. The road took a sweeping curve round the side of a hill to gain a ridge that led up to the town. We could see traffic on the road indicating what was ahead and some of the heavy vehicles seemed to be labouring with the gradient. There were a couple of deviations off-road indicated by the waymarks but we decided to just get our heads down and stick to the road. At last it levelled out and the road ran round below the castle before turning for a final climb into the town. 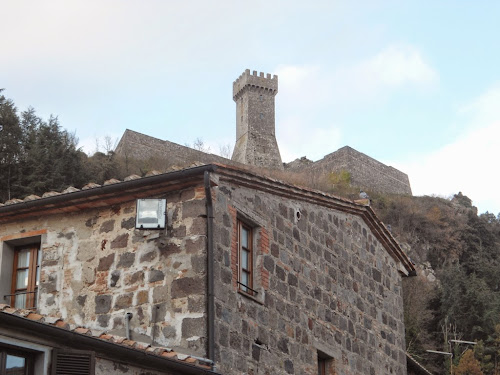 There was a final concern about today's walk, we hadn't booked any accommodation and there was only one hotel and a pilgrim hostel near the church. We were hoping to get a room at the hotel, Albego La Torre. As we walked down the narrow street towards the town centre I asked a woman for directions to the Albergo. She rattled on in Italian and the only word I understood was perigrino, she then tried to give us directions by pointing. Eventually she gave up and indicated to follow her and she took us into a piazza where the church was and round the side to the pilgrim hostel. She rang the bell but there was no reply, now with sign language she told us to wait and she would go and find the key. It was now getting cold and we put on our rain jackets while we patiently waited. Eventually a woman arrived, shook our hands, introduced herself as Morena and opened the door. It was a big place with a few small dorms, we went into one with just two double bunks where we dumped our bags. Morena then took us round the facilities, kitchen, toilet and shower, dining room and lounge then to an office where we had to fill in a form and the visitor's book. Once the documentation was complete we were left on our own. The only problem was that it was a big place and although there were plenty of radiators we weren't sure when or if they would come on. If they didn't we would end up sitting in the small kitchen with the gas rings to warm us.

Moira immediately went out again to forage for food. I made a cup of coffee and had a shower, the water was piping hot. While I was drying myself I heard a door bang and a man's voice but when I came out he was gone and Moira was there. She said he had been somebody in charge of the hostel and had got the central heating going, the radiators were now warming up nicely. Moira had got pork chops at the butchers, she didn't know what chops were in Italian but strangely he had an English / Italian dictionary on the counter and she looked it up and showed him the translation. She made chips in the oven to go with the chops and some carrots but to start there was soup from a packet. It was a lovely meal but there was a lot of washing up for me to do tonight.

After such a long walk today, tired, we got to bed early. I intended to read for a while but my eyes were soon closing and I was fast asleep.

Posted with Blogsy
Posted by Unknown at 09:07