The day began very well, we left at 7:45 am after a basic breakfast of a cup of coffee and a couple of croissants. It was dry and the sky though overcast was showing signs of improving but here wasn't any signs of rain. The route took us through Sutri's historic old town and in the main piazza there was a small crowd gathering to watch the erection of a large Christmas tree. 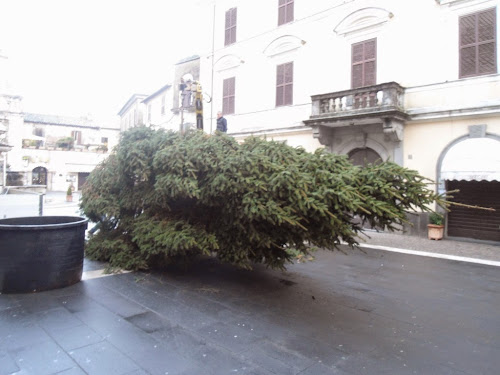 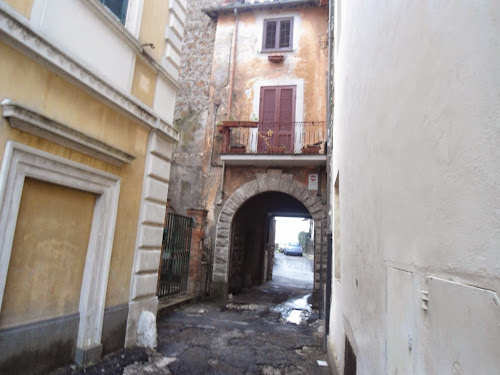 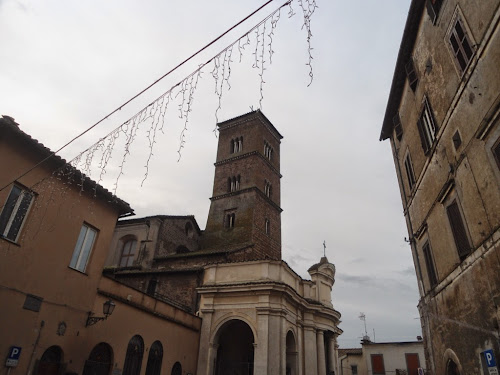 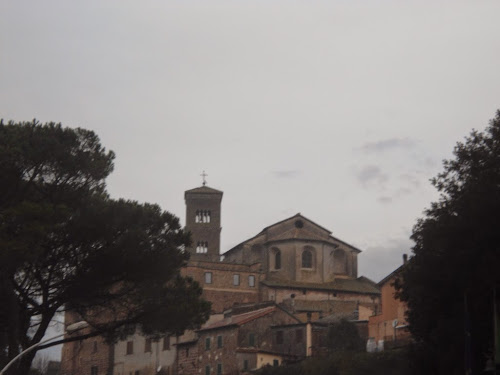 The waymarks took us through the narrow streets and down to the Via Cassia. Before leaving we crossed the road to the amphitheatre. It was locked up and I was taking photographs through the gate when the woman arrived to open up and let us in. It was a large open area with tiers of stone seats in a circle around it. 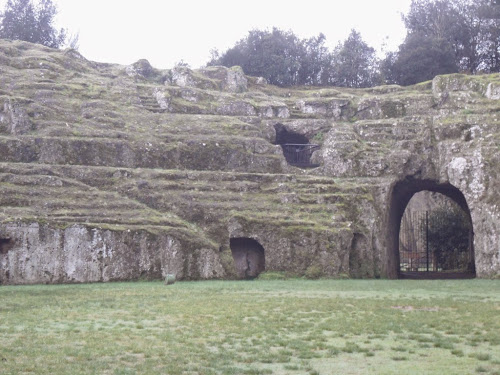 When we started off there was a cycle path beside the Via Cassia but when it finished we had about half a kilometre at the side of the busy road before we were guided off. Another kilometre was on a minor road before we turned onto a gravel track though hazelnut trees. There weren't any nuts left on the trees, obviously long harvested and the only trace was a few broken shells on the ground. It was a pleasant walk on a dry firm path and eventually we reached a tar road at a golf course. On gravel again we went round the edge of the course to reach the town of Monterosi. There was a climb to the town centre but half way up the hill we found a bench in a car park where it was time for a break and a cup of coffee.

After our mid-morning break in Monterosi there was a choice of routes and both reportedly waymarked. One tracked quite close to the Via Cassia while the other took a loop into the countryside to avoid the road and give a quieter walk. We decided to follow the latter though it was longer. It was lovely and flat and initially on a firm dry gravel track but later there were large pools of water and patches of mud. We were making excellent time but not sure where we were and how far we still had to go. When we reached a tar road, Via Ronci, I consulted Cicerone. It said that we followed this road as it turned to the right and met a bigger road the SP16b. After crossing this road we should have later turned right then through an industrial estate to join up with the other waymarked route. We didn't see the turn and just followed the waymarks which carried on straight. After about a kilometre a rest was called for and another look at the guide book. Now it didn't correspond with where we were but the road we were on was still very well waymarked. 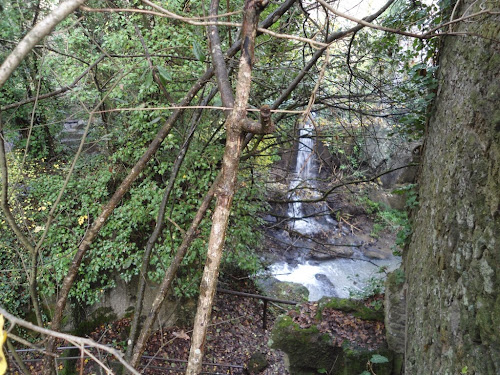 It led us through a lovely park and over a stream with waterfalls none of which were mentioned in the guide book. At every bend and crest of a hill we expected to see the town ahead but nothing. Where we started to worry was at a sign with waymarks pointing ahead and above it another sign with Roma and an arrow pointing in the opposite direction. We carried on but when the tar road changed to gravel and it was meadows and woodland ahead we didn't like it. At that point we turned round and headed back to see if there was anybody who could give us directions. There were a few houses about nobody in them, we had covered about 500 m when a car came along. Moira flagged it down and they told us that Compagnano di Roma was indeed straight ahead, about 4 km. Off we went again on this still waymarked route.

I began to despair as the track deteriorated from tar to gravel to earth to a narrow muddy wet path. The waymarks also deteriorated from the red and white stickers to strips of red and white plastic tape tied to trees. We didn't have a clue where we were and the dreaded thoughts were of having to get the tent out tonight. The only signs along the path said we were in a Nature Reserve. Suddenly we came to a clearing with a digger working at unblocking a ditch at the side of the track and there was a sign of life. I asked the man for directions and he pointed to a track ahead and said 2-3 km to Campagnano. We had only gone a short distance when we saw high on the hill a tall church tower and houses above a protective city wall. I must have misheard the distance and he had said, 200-300 m. It was the usual steep climb to get into another hilltop town but we had somehow got there. 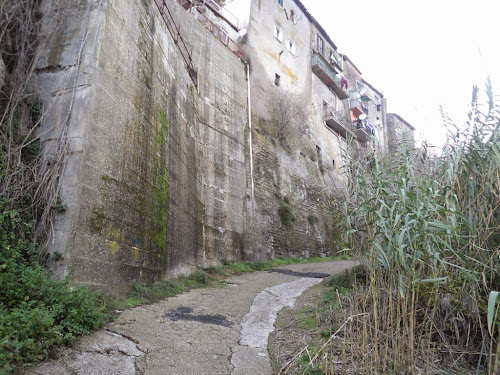 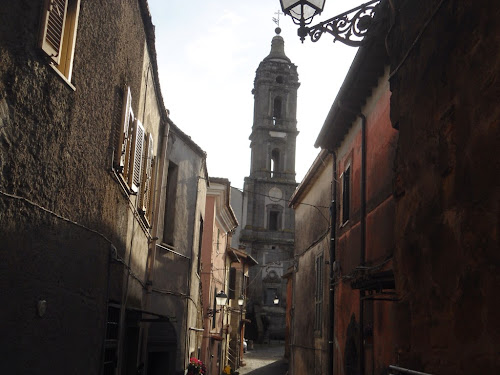 We entered the old historic town and we had to make our way through to the new section for our hotel. It involved asking a number of times for directions but at last with a sigh of relief we found it. The room was practically a replica of the one last night just a bit more expensive. We also had the same lunch as yesterday, soup, eggs, coffee and a chocolate biscuit. The WiFi was also first class and I had the radio going.

We relaxed until 4 pm then went for a walk. I had copied the initial direction for getting out of town tomorrow from the guide book and we spent some time orientating ourselves. There is the usual trouble finding your way around when there are no names on the streets. I had to resort yet again to asking directions. The man luckily spoke English and we soon found the route with its red and white VF stickers. We also found a supermarket and got coffee, fruit, eggs bread and wine. For diner it was also a repeat of yesterday, pizza. We bought two this time but didn't finish them, what's left will do for lunch tomorrow.

It was another evening listening to the radio and reading. We got to sleep at our normal early time. Just 2 days to go !

Posted with Blogsy
Posted by Unknown at 21:11